The Mega Man Zero/ZX Legacy Collection has finally been released in most countries around the world and what better way to celebrate than a brand-new interview with series artist Toru Nakayama?

The interview, which was recently published in the April issue of Japanese magazine Nintendo Dream, ALSO includes a never before seen piece of artwork that's not included in the Zero/ZX Legacy Collection and some sketches of the game's box art.

Check it out after the break!


Thanks to Kobun20 and Vhyper1985 for joining me in purchasing the magazine and (of course) to Sidier for translating it. Without further ado... 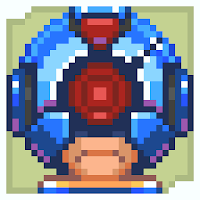 Freelance illustrator. When he was working with Inti Creates, he mostly did character designs and main visuals for the “Rockman Zero series (GBA)”. After becoming a freelancer, he’s also worked in character designs for games such as “Dragon Marked for Death (Switch)”.


What led you to draw manga or illustrations?

From what my parents tell me, I was always drawing stuff even before I gained conscience of myself. When I was in elementary and middle school I read the Weekly Shonen Jump (magazine) and usually looked at robot animes from which I made imitation illustrations and manga-like drawings (laughs) and that’s how I spent my youth. There was no Internet at the time, and since I lived in a remote place there were no entertainment facilities either, had no money, spent the days drawing with only pens and paper. I also did the same during classes and so I failed my first try at the college entrance exam. I did end up going to a Kansai region college but since there was a game center before it I’d go and spend my time there instead (laughs).

The game centers’ game screens density of the time was increasing and so the depiction range was also getting larger. I realized there was another field of illustrations apart from manga and anime, which made me feel very excited. And amongst those, the illustrations by Capcom were something I really liked since they were so pretty and cool. And so I undertook a job exam, to give it a try.


How do you add the colors?

The basics are making line drawings on paper using pencils, as a rough draft, correct them and add the colors through photoshop. When I drew analog illustrations, I used acrylic and copic but it takes so much time to fix it when you make a mistake, to the point I switched over to digital drawing instead. When I worked on “Rockman Zero”, the theme color was set as being red, and from then I added or removed extra colors, and roughly distributed the colors. It’s easy to add and subtract another color to the (base) red color in digital; I try different representations of light, try a lot of things when adding the colors.


How did you feel about drawing a new illustration for the series in a while?

To be honest, I didn’t expect that I’d get a chance to do so after 15 years’ time (laughs). It did tell me again that the “Rockman” series games are remembered and loved by many people indeed.


What are the concepts and points you’d like for us to focus of the illustration for the collection?

Since at the basis it’s a collection, a feeling of festival by gathering all main characters was the main idea, rather than the story or the world view. The light of the “Z” splits the screen, The Rockman Zero part has his armor broken and hurt and about to break down, yet cooly stares at the foe and keeps on fighting, that’s the world it is; the Rockman ZX part is wrapped in armor but feels immature and reckless, and grows within battle, that’s the kind of world I wanted to depict. At first I only had 1 character but you need both of them to (represent) the ZX world. But then Ashe and Grey feel absent, and so I had to cut the “rival” characters (from the drawing). To compensate for that, I suggested making an illustration with all enemy characters for the e-Capcom limited edition.


What do you think it’s most important when making characters?

To be honest, people at my level are never able to answer that in a clear manner (laugh). My rough idea is that one’s personal fantasies ratio adjustments and doing something out of feeling, Games are normally made by a lot of people, so you could say that a design’s first priority is to become a manifestation of the designer’s ideas. Personal fantasies ratio is not very present, it’s a factor used to complement. A trigger added to the needs, the intent of the planners, and work in the development itself… There’s endurance and playing by ear, needed to sway things in the gaps between them. I’m always bad at all of these, and it’s hard for me to properly carry out everything as intended (laughs)

On the other hand, when it comes to manga or contents you make for yourself, the personal fantasy ratio is at the max, you want to expand on your fantasies and the main point is to expose them. Being able to imagine a lot of things is fun, and you can forget about harsh tuning or having to convince others (laughs). Inversely, they become designs that fit within the range of your fantasies, be it for the best or the worst.

1) What was your first illustration ever?

According to my parents, when I was an infant, I kept on drawing “Kamen Rider”. But they were more like scribbles than illustrations.


2) What are your favorite illustrators or mangaka?

I’ve got too many illustrators I like, can’t list all of them (laughs). I really like the Capcom Design Room members, but apart from them, when I was drawing in my adolescence, and someone who influenced me a lot mentally was… Shotaro Ishinomori (*1), Yoshikazu Yasuhiko  (* 2), Masamune Shirow  (* 3), Yoshihiko Umakoshi  (*4), Tetsuyarou Shinkaida  (* 5), I think these are the main ones. It’s obvious they’re really good at drawing, their drawings of girl characters were beautiful and sensitive. That might’ve been my motivation to want to be as good as them at drawing.

What I think nowadays is the best hero design, is Shotaro Ishinomori’s “Kikaider (*1)”. A polished beauty, and how it’s easy to tell, it’s a culmination, a wall I can’t overcome.

*1: Protagonist of the Live-action TV program and manga “Android Kikaider”.


4) What’s your favorite game amongst those you’ve played?

There’s a lot of games I like and can’t really settle for one, but as for genre I like the sprite action and RPGs. I think the one I poured most money for was “Street Fighter II (Arcade, SNES, etc)”. As for RPG, it’s “Tactics Ogre (SNES)”, the graphics and the story were impactful, a game I can’t forget.


5) What games are you playing now?


6) What would your job be nowadays if you weren’t doing this job?

Good question… I can’t imagine it, but maybe even if it wasn’t in the world of videogames, I might’ve been working as designer for commercial or industrial products for a while, but since I’d kept drawing cute girls I guess I’d quit almost at once (laughs).


7) Is there something that moved you as of late?

The release of this collection!! I really confirmed that it was very fun to work with games which a lot of people say “I played it when I was a kid” or “I still like them” 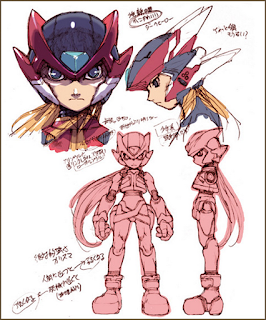 Zero’s initial rough design. It's a group of illustrations from before the head and body were balanced, as well as adjusting the details. Instead of something very mechanical like armor or decorations, I think I designed it as something simple and close to humans. 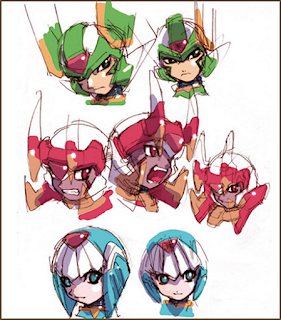 An initial rough design of the 4 Heavenly Kings. I tried reducing the animal aspects at the most and simplify them, and on the other hand added lines related to the last boss (design). It was also to make them optimizable for the sprites resolution of the time. If it’d done it now I might’ve taken a different design approach. 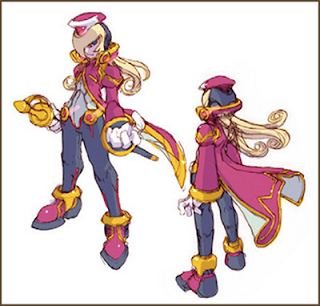 Elpis’ initial rough design. When the making of “Rockman Zero 2” was decided, we needed to design the foe. We thought of many types of foes as we discussed the series’ direction. This rough illustration is from that time. I think that ultimately, the design was decided since it matched the storyline.
Posted by Reploid21XX at 5:00 PM