Mighty No. 9 Concepts: "Xel" and the Three Doctors 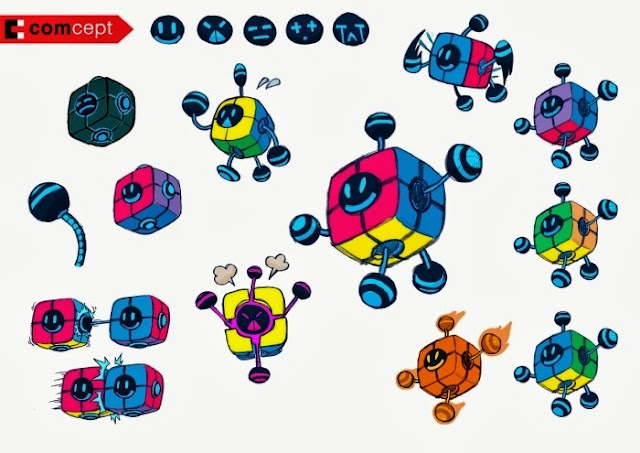 For the final Comcept Concept Wednesday, the Mighty No. 9 Kickstarter brings us a double dose of behind-the-scenes goodness. First, we have our first look at the "xel" mascot character, tentatively called "mega-xel". This design serves as the basis for the plushie (one of the $175 pledge rewards).

Cute, sure. But who or what is it? You see, "xel" is an important concept to the world of Mighty No. 9. The world "xell" (pronounced "cell") stems from the word "pixel". Each and every individual xel is a cube-shaped robot, and it receives orders from a central unit known as a "core." Beck, Call, the Mighty Numbers, and ordinary robots are all composed of xels! Every action a robot takes is ultimately made possible by the communal work of xels. They are what cells are to a human being, in other words. Pretty cool concept, wouldn't you say?

Second, we have the doctors responsible for creating Beck and the Mighty Numbers: Dr. White, Dr. Blackwell, and Dr. Sanda. Director Koji Imaeda and his team are still hammering out what the trio will look like, so hopefully we won't have to wait too long.

For more details and images, hit up today's Kickstarter update. You won't be disappointed!
Posted by Protodude at 4:28 PM