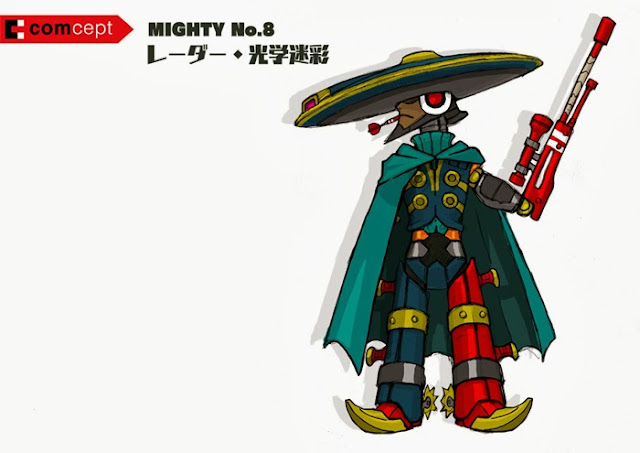 Mighty No. 8 is this week's boss reveal from the Mighty No. 9 crew. He's a brooding hunter; a master of espionage and stealth. He's quite the sniper, too.

On the Kickstarter update, you can see that his design was pretty much solidified by the first drawing. The team originally envisioned Number 8 to be the second female boss alongside Number 3. However, character designer Kimo Kimo thought Number 8's description better suited the image of a classic gunmen from an old Western flick. "I was really enamored with the idea of attaching an E-2C Hawkeye-like dish (as a hat)", writes Kimo Kimo. "He has weapons built-in all over his body -- the design even had a detachable leg cannon he could give the other Mighty Numbers to use as a bazooka!"

Be sure to check out the Kickstarter update for more details and concept art! And with that, we have only two more Mighty Nos. yet to be revealed!
Posted by Protodude at 4:35 PM