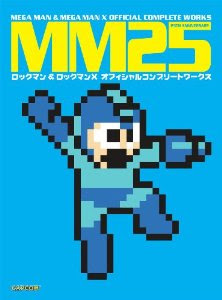 Well here it is: the English edition of MM25: Mega Man & Mega Man X Official Complete Works. The cover isn't quite as flashy as its Japanese counterpart, but I rather like it (a Mega Man X sprite thrown in for good measure wouldn't hurt though).

Joining Barnes & Noble, preorders are now a-go on Amazon. Unsurprisingly, we have two conflicting release dates: September 10 (Amazon) and August 28 (B&N). I was previously informed B&N's is accurate. Plans may have changed, though. In any case we will be getting more details (and clarification) from UDON in the very near future.

Stay tuned!
Posted by Protodude at 1:16 AM