Here's a Letter to the Editor scan from a 1999 issue of PSM. I present this to you for two reasons: 1) the doubts we face today aren't particularly new and 2) things change. Also, I find Robert DeJesus' illustration charmingly amusing. It's just as relevant as ever. 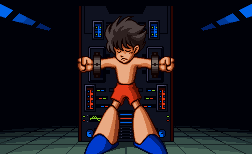 In North America, there were no Mega Man games released in '99. Japan, meanwhile, were treated to the Rockman Complete Works lineup and The Misadventures of Tron Bonne.  That's six enhanced ports and one new title built from the ground up (the latter didn't even star Mega Man).  The annualiztion we grew accustomed to wained for the first time.  A year of uncertainty brought plenty of doubts: "where's MMX5?" "I didn't like Legends all that much. Where's the REAL Mega Man?!" "Mega Man 9 when?"

Yes; those were real questions being tossed around on forums. Looking back now, it's all pretty nostalgic. That brings us to point #2.

Charles' letter (and a share of similar inquiries in previous PSM issues) goes to show you how much can change in a few short years.  The new millennium brought us Mega Man X5 and Mega Man Legends 2. A couple of years later, Capcom dropped the big one: Mega Man Battle Network. An action/adventure RPG where you trade firearms with a friend?  Goodness, Charles, you practically predicted the future.

Battle Network acted as a resurgence of the brand, earning Capcom big bucks for many years to come and ushering in a new wave of fans. I don't believe any of us in '99 ever imagined the brand would reach such success again. Oh, and don't forget about Street Fighter. The franchise has grown considerably since its "dormant" days in the late nineties. It was gone but not gone forever.

All in all things change. Better days may yet come.
Posted by Protodude at 1:55 PM