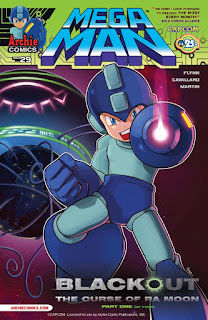 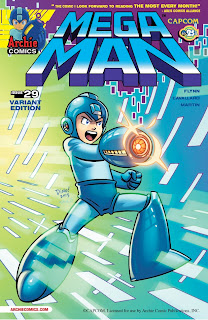 With the Worlds Collide crossover event wrapping up, Archie Comics are looking ahead to the next big Mega Man story arc. Here's out first look at "Blackout: Curse of Ra Moon" Part One.

The biggest storyline in Mega Man comic history starts here! "BLACKOUT: Curse of Ra Moon" Part One: The world has shut down!  When the power of Ra Moon robs the Earth of all its technology, it’s up to Mega Man and a handful of Robot Masters to set things right. But just how can robots handle the force of a technological meltdown if they’re cut off from the ability to re-charge? Has Mega Man fallen right into Dr. Wily’s trap?  Or has Wily underestimated his mysterious new ally? Featuring all-new cover art from Patrick "SPAZ" Spaziante, and variant cover by comics-superstar Dean Haspiel!"