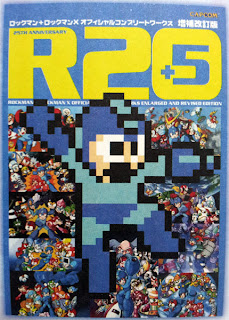 That's a whole lot of Blue Bomber, no? Yup; GameSide magazine has revealed the cover for the revised R20 art book (now titled "R20+5"). While the contents of the book are promising, the cover feels just a bit too underwhelming; especially compared to past Rockman art books. I don't know-- I guess I was expected something fresh and original.

Still no word if UDON will get there hands on this one... but then again, they haven't missed an "official complete works" yet. It may only be a matter of time!
Posted by Protodude at 4:48 PM