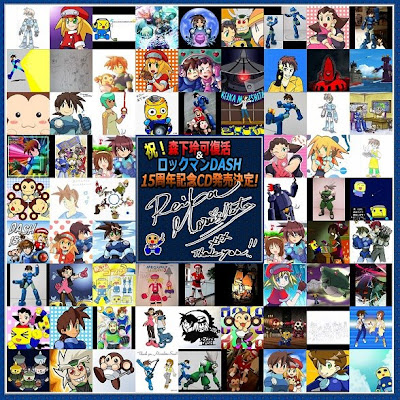 "As many of you may recall, about a month ago, Reika Morishita started a fan-art drive for a special "surprise" project to commemorate the 15th Anniversary of the Rockman DASH (Mega Man Legends) series. Well, the event has long since passed, and Reika once again came though on her word! Earlier today, she revealed this special surprise via our very own Team Japan, and we have it right here, right now!

..,Well, sort of, anyway. Reika tried her best to make this the official jacket for her CD, but unfortunately, she ran into some copyright issues with Capcom and was unable to make this possible. Regardless, however, Reika still acknowledges our art as the "official" jacket for the CD release of her songs. As a result, she wishes that everybody who contributed to her project download this special cover-art, and use it to replace the "official" cover of her CD when/if they purchase it. I'm telling you, the heart of this woman is just amazing! "


Bit of a bummer this couldn't but on the actual CD... but wait! There's some good news: Morishita will include a special booklet of credits along with the release of the CDs, featuring the names of everybody who contributed to the album. That's a pretty awesome gesture right there. Congratulations to all of you who made it in!

Sends your thanks to Morishita's official Facebook page here.
Posted by Protodude at 12:08 AM