Persistent Rockman Corner reader Pedro has made a profound discovery withing the guts of the recently released Mega Man X iOS port. Picking apart the contents of the code, Pedro succeeded in decrypting and opening the graphic files used by the game; he was surprised to discover following images... 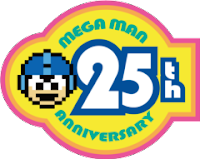 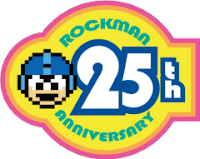 Why, it's the official 25th anniversary logo! Spiffy, no? A little plain for my tastes, but for all we know, this could be a work-in-progress/placeholder design. Mind you, we aren't suppose to be seeing this right now.

As per usual, the logo will probably be used to promote products and events related to the Blue Bomber's 25th. Previous anniversary logos have adorned everything from games and books, to commemorative food products. If this is indeed the final design, be prepared to see it grace everything released under the IP throughout the year.

Specific plans for the anniversary have yet to be disclosed by Capcom; however, we do know that things are on the burner. According to Christian Svensson, Capcom are currently in the process of planning "things" to commemorate the occasion:

"25th for MM and 25th for Street Fighter next year. "Both will have "things" to commemorate the occasion. Exactly what is in planning stages but the are solid ideas already being batted around I hope you guys will like. But please bear in mind, they won't happen until some time in our next fiscal year begins mostly (so still a good ways away)."

Next fiscal year officially kicks off around March 31st, 2012.  I advise you continue to keep your expectations in check until we have a better idea of what, exactly, these "things" may be. Nevertheless, the logo is an ensuring sign of things to come.
Posted by Protodude at 11:57 PM