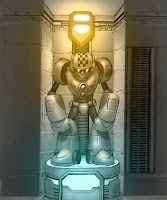 Over the next few weeks or so, I'm going to begin dumping some old promotional/pre-release Mega Man assets right here on the blog. In general, most haven't been seen in years... or at all.

Kicking things off, here's a single piece of Mega Man Anniversary Collection concept artwork. I obtained this piece a few weeks after this story ran from a source that once worked closely with the game's developer, Atomic Planet Entertainment. For the usual reasons, he's chosen to remain anonymous.

It's a simple, ambient little piece that offers a look back at MMAC's planning phase.

Back when ideas for the collection's contents were being hammered out, the art team had their hands tied conceptualizing a hypothetical "Mega Man museum" -- a central hub where players could explore content spanning across the franchise's 15-year history.  Inspiration for the hub's infrastructure came directly from Mega Man 7's Robot Museum stage, where the bodies of lifeless Robot Masters lined the halls.

The image of an idle Turbo Man -- awaiting admiration from new and old players alike -- embodies the spirit of the hub's original aesthetic concept. The area would have been laced with robots off all shapes and sizes serving as decorations and figurative curators. However, a tight and often grueling development process forced the concept to be significantly scaled down.

Traversing a theoretical Mega Man museum did, in fact, make its way into the final game. Boot up a copy of Anniversary Collection and you'll be whisked away to the fruit of Atomic Planet's efforts. It's not as grand as the team's initial vision, but it's an admirable tribute nonetheless.
Posted by Protodude at 9:48 AM