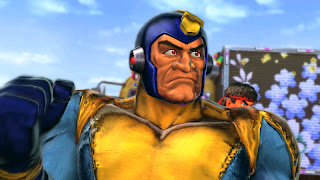 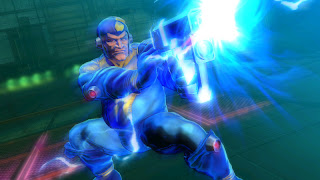 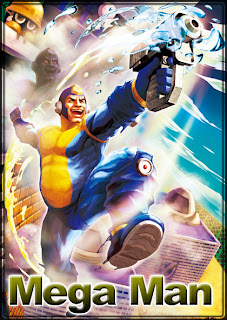 Strange, right? Well it gets a bit stranger. Get a load of BBAMM's bio:

"Known as a Digger, a person who digs up relics from the past for research. He is a hot-tempered man, but has a strong sense of justice and is also very polite. His weak point is that he is easily rattled when backed into a corner. He is always running around in a hurry due to the demands of his partner Roll, and this time he's been asked to travel to Antarctica to retrieve a mysterious box."

BBA Mega Man is currently planned to appear alongside Pac-Man, Toro, Kuro and Cole as PSVita/PlayStation 3 exclusive fighters. It remains to be seen if he will appear in either or both versions.

It would seem Ono actually consulted with Keiji Inafune when considering Bad Box Art Mega Man for the game. This means BBAMM's inclusion was planned way back when Mega Man Universe was still in production. So, yeah; chew on that for a while.

We'll keep you updated when more information drops.
Posted by Protodude at 7:19 PM