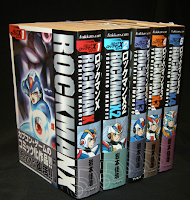 After having been out of print for many years, Yoshihiro Iwamoto's acclaimed Rockman X manga is being reissued in Japan. Fan-demand has led publisher Fukkan to reissue the manga in its entirety, available while supplies last.

The manga's most recent reissue was in 2005, coinciding with the debut of Irregular Hunter X. For collectors, the big draw there was the new covers made for the books by Iwamoto himself. The 2012 reissues are based on those editions, which condensed the original 12 tankobons into five thick volumes (pictured).

Orders are now being taken directly on Fukkan.com for these 1,995 Yen (roughly $26) books. Fukkan estimates the reprints will sell out by mid January, so once they're gone, they're gone. The publisher made no mention if they intend to offer the 2012 editions again at a later date.

Considering all their success with Mega Man, I’d say there's no time like the present for UDON Entertainment to bring these puppies stateside. Keep voicing demand, and we'll see what happens!

Thanks for the tip, Amunshen!
Posted by Protodude at 5:55 PM