Got Prototype Version Questions? Ask The Only Journalist Who Played It 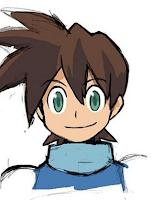 Had things gone according to plan, you'd be playing Mega Man Legends 3: Prototype Version RIGHT NOW. But no, Capcom blue balled us (a phrase I don't use lightly). At the end of the day, we're left wondering: what was the game like? Only one man knows.

Meet Nintendo Power's Chris Hoffman. Hoffman just so happens to be the only member of the gaming press who got his hands on Prototype Version, due to spearheading a big MML3 feature in the magazine some months back. His credentials make him the perfect individual for GamesRadar's latest, tantalizing initiative:


"Nintendo Power’s Chris Hoffman happens to be the only journalist to ever play Mega Man Legends 3 before its cancellation, and he also happens to work right down the hall from GamesRadar.

This is a grand opportunity, folks. I, for one, won't be passing this one up. Once you've done some pondering and reflection, head on down to GamesRadar and ask away!

Posted by Protodude at 7:41 PM