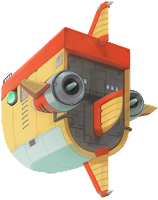 It's the early hours of August 19 in Japan right now, and that means it's only a matter of time. The Japanese Devroom, the very pillar of Rockman DASH 3's development in the East, officially shuts its doors later today. The developer blog and forums will be terminated at 12:00 Japan time; roughly eight hours from this writing.

Although activity on both sites ceased as of July 18, Capcom left the sites open to spread word of the game's cancellation. A month later, they're ready to pull the plug. A good ol' 404 is expected to replace all pages associated with DASH 3 in a matter of hours. [UPDATE: It's dead. 12:00 on the nose.]

Fortunately, the North American Devroom, hosted at Capcom Unity, will survive the purge. GregaMan has previously assured fans the forum and blogs will remain open indefinitely, and it continues to thrive in spite of Legends 3's cancellation, powered solely by the fans.

Those looking to hold onto the Japanese site's assets, look no further than Legends-Station. User Eric Chiz has compiled several file's worth of data, available for download at the preceding link. Nab 'em quickly before the files up and expire.

The Devroom had an amazing run. The dev team has my heartfelt gratitude for all their hard work. Wishing them all the best.
Posted by Protodude at 9:25 PM