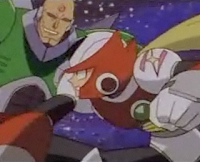 According to a reliable source, Capcom is in the midst of pre-production for a short live action rendition of the classic Zero vs. Sigma fight sequence from Mega Man X4, as an act of service to the fans. The sequence is being produced by the same film crew behind the mini Dead Rising live action film, and is set to debut online some time next year.

Confirmation of this comes from none other than Lucas Gilbertson, who provided the voice of Zero in Mega Man X Command Mission, Mega Man X8, and Mega Man: Maverick Hunter X. According to Lucas, not only is he at the helm of the project, but he's also set to star in the role of Zero.

While it sounds a bit hard to swallow, both Lucas and my source (who's chosen to remain anonymous) assured me that the project is very real and is moving forward. Needless to say, this should be very interesting. I'll keep you posted on any future developments.
Posted by Protodude at 7:37 PM