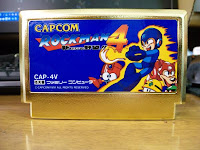 With only eight in existence, the golden Rockman 4 cartridges are one of the rarest items in the franchise's history. It's only natural for bootlegged gold carts pop up from every now and then, tricking collectors into forking over large sums of cash for a well designed fake. Such is the case with this Ebay auction.

At a glance, the $9,321.62 auction certainly looks like a legit cartridge. It's gold, it has to be one of the eight, right? Not so fast. The auction is using the exact same stock photos of the fake spotted on Yahoo Auctions Japan in December 2009 (as reported by The Mega Man Network). Further, legitimate gold carts are individually numbered on the underside of its shell; the seller was unable to identify a number of any sort when asked by a PRC reader.

More than likely a bootleg. I urge collectors to be very cautious with this auction and future gold carts you happen to spot. Always ask about the ID number first before purchasing!