There's this famous, old preview for the original Mega Man X that's been floating around on the net for quite some time which you might have seen over at The Mechanical Maniacs or The Reploid Research Lavatory. The preview, dating back to the game's debut in the summer of 1993, touts shots of an unused "white city" stage, a curious alternate plot for the game involving a "RoboPolice" task force, and an early concept of what would become X's armor.... 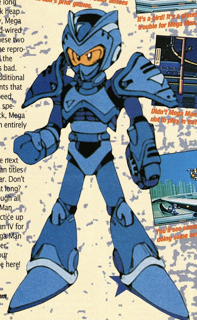 Notice all the little intricate details throughout its body, the mouth plate, raised shoulders, etc. Quite cool looking, albeit a little too "heavy duty" for my tastes. The armor in particular has been an object of speculation among fans for quite some time, with most wondering just what it might have looked like if it weren't a mock-up. Well, wonder no more; Kobun 20 of the Reploid Research Lavority, in his quest to chronicle the development of X1, stumbled upon the below image of the work-in-progress armor from GamePro's Winter CES 1994 coverage 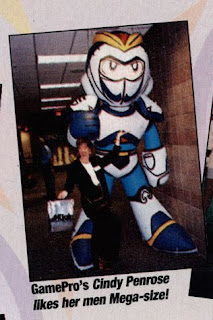 Yes, that's a giant inflatable X. Nevertheless, it gives us a good idea of what the armor would have looked like in color. You'll notice its lost a lot of detail when compared to its conceptual counterpart as it inches closer to the final design we know and love. I'm a fan of the Casshern style mouth plate; it just gives off this vibe that X is ready for battle. A dropped attribute, I'm afraid. X wouldn't feature a mouth guard till X6's Shadow Armor.

It's interesting; art of the mock-up armor hasn't appeared outside of the pages of GamePro and other gaming magazines of yesteryear. Capcom has never featured it in any official art books, not even Mega Man X: Official Complete Works. Why? We don't know for sure, but a popular theory was it was drawn by a GamePro artist exclusively for the magazine's MMX coverage and wasn't official. I don't think that theory holds true now thanks to the appearance of the inflatable X.