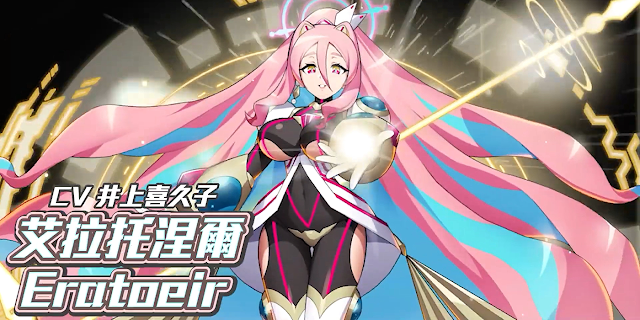 Over the past few months, Droitclair and Angepitoyeir became playable characters. And now it's their eldest sister's turn —Eratoeir.  Her design breaks away from the typical Rockman mold, with striking proportions and vivid colors that will leave no one indifferent.

Her second active skill is Divine Summoning. It releases long range divine spirits. One of the skill cards will increase damage and reduce damage taken.

As always with these sort of character showcases, it's difficult to get the full picture. But we can deduce that she has skills that will weaken the rival and she can heal herself too.

As a side note, the trailer shows a new PvP stage and confirms that Eratoeir's voice actress is Kikuko Inoue. She doesn't need an introduction but for the unfamiliar, Inoue is a very popular on-screen actress, singer and voice actress from Japan. From Ranma to Death Stranding, she's done pretty much everything.

And with this, the sixth original Rockman X DiVE character has become playable. What original character will be next?