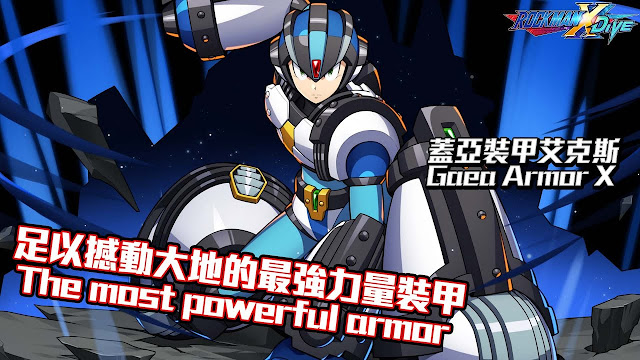 If there's one thing you can bet on, Rockman X DiVE will provide new X armors from time to time. Following Fourth Armor X back in January, the Gaea Armor from X5 is here. It even features the ability to cling to walls like in the original game.

Gaea Armor X's first active skill is Gaea Shot. It releases a buster shot that will cause huge damage when maximum charge is reached.

His second active skill is Giga Attack. Faithful to the original game, it releases a short range energy blast in front, ignoring terrain.

On top of the ability to cling to walls, judging by the trailer, he is a heavy hitter with the ability to charge active skills very fast. Dashing seems slower than normal and while the trailer doesn't tell us anything about it, it's safe to say spike immunity is in too.

What's more? This week we have a new event called "Strike of the Crimson Assassin". While details weren't revealed in the trailer, we can see the Magna Centipede icon. It's likely to be an event similar to the Beat the Chameleon event, aimed to help players get memories of his respective chip.

Let's us know if you're adding Gaea Armor X to your collection in the comments!