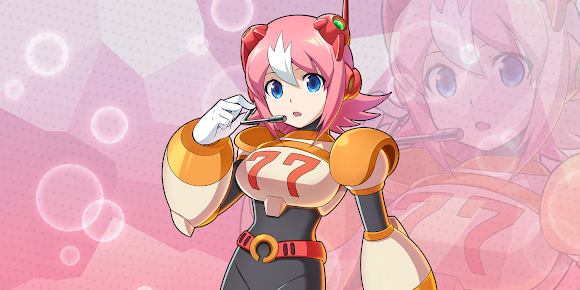 Following an appearance in Teppen and nearly a year after NebulaJoy accidentally leaked the news in one of their infamous ads, Rockman X Command Mission navigator Nana is finally getting ready to join the Deep Log!

Shortly after today's maintenance, players that logged in to the game were greeting with a surprise, Nana who until this point was unannounced, was visible in the character selection screen

Capcom has yet to announcement when she will be available, let alone acknowledge her surprising appearance. However, they did previously confirm there won't be downtime for maintenance next week. Perhaps she'll be added in that time along with or whatever new content coming in seven days. Was this intentional or a mistake? I'll let you decide!

While we wait for the official announcement, can check out her skill set below!

A Blizzard appears on the target, continuously dealing 180% of damage to all targets in range and reducing their movement speed by 54%, without taking any damage during use. (If there is no target, the blizzard will appear on oneself)

2. Ultra Fire: The Blizzard transforms into an Ultra Fire that deals damage to all targets in range and causes the target to burn, dealing 14.4% of damage every 0.5 second (if there is no target, the Ultra Fire will appear on oneself).

Performs a Precise Analysis on the target. After a short period of time, it will launch a strike that deals 360% of damage to the target in range, causing a weakened DEF state and a 43.2% increase in damage, without taking any damage during use. (if there is no target, the Precise Analysis will appear on oneself)

2. Weapon Seal: After hitting, render the target unable to use a weapon.

3. Skill Seal: After hitting, render the target unable to use skills.

1. Special Armor: 40% chance to become immune to the effects of no skills; the same type of chance can be stacked. When HP is 50% or higher, reduce damage taken by 20%.

2. Resource Grab: When hitting a target whose DEF is weakened, restore HP equal to 30% ATK. This effect can trigger only one time every 3 seconds.

3. Continuous Barrage Device: When you hit a target with weapon, reduce the preparation time for Precise Analysis by 1 second. This effect can only be triggered again after a 2-second cool down.

When you hit a target with Precise Analysis, reduce the preparation time for Long Distance Strike by 2 seconds. This effect can only be triggered again after a 2-second cool down.

4. Contingency Plan: You can perform Precise Analysis again when you are hit, and you will gain Enhanced DEF state that reduces damage taken by 60%. This effect can only be triggered again after 4-second cooldown.

5. Overdrive Computation: The time needed to relaunch Resource Grab for HP restoration is reduced by 1.5 seconds and the number of uses of Long Distance Strike is increased by 1 time.

And that's all for now. This is a rare occasion where we can read a character's full skill set before being officially added to the game. Let's us know what you think in the comments!