We've got another sneak peek from the fan-led Rockman DASH: Great Adventure Guide English scanlation project. This time, we're looking at some very early concepts for the Main Gate -- the largest, most dangerous ruin on Kattelox Island. 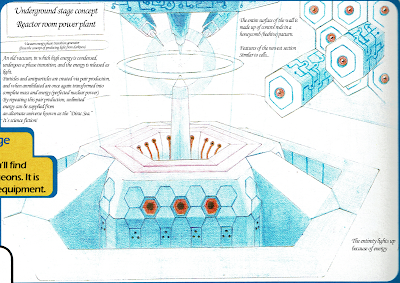 The image on the left is the "Boss Life Support System" room. It's an early incarnation of Mega Man Juno's chamber, who might I add, is sleeping inside that monolithic "coffin". The imposing fixture didn't exactly make it into the final game, though.

The same can be said for the big energy converter in the right image. The intricate machine might even be an early version of the massive Proto Refractor found deep inside the Main Gate. The commentary about the "Dirac Sea" is interesting too. It's a real-world thing... and another nod to Evangelion.

And that's all for now! As of late January, the scanlation project is roughly 72% complete. It's inching closer to completion.

More updates and previews to come!

Posted by Protodude at 8:32 PM