Analyzer Wall is her second active skill. It deploys a force field that damages enemies within range and shoots energy cubes.

One of her passive skills will grant her a shield and induce stackable slow status to the target. 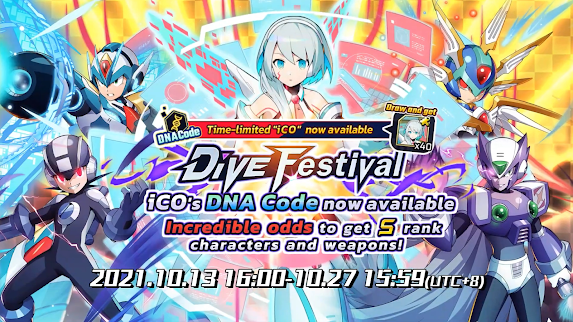 The event stage is called Pulsing Force of Destruction. It will be live together with the DiVE Festival capsule this Wednesday through October 27.

The stage revolves around helping RiCO to collect data and find out why ViA has been afflicted with an abnormal condition. Additionally, a new system that was tested by the development team will debut this Wednesday.

The system will let you improve your characters akin to the hidden skills for weapons and involves the manipulation of DNA. Unfortunately, that's all the info that's been revealed at this time.

You may have spotted the Nightmare Virus from Rockman X6 in the trailer, too. It's the first time the enemy has appeared in the game. Also, if you didn't recognize the music track in the trailer, it's an unused piece called "STAGE SELECT" from Rockman X5. It can be found in the "Capcom Music Generation - Rockman X1~6" and "20th Anniversary ROCKMAN X SOUND BOX" box sets.

The Japanese version of Rockman X DiVE was released on October 26, 2020. To mark the occasion, the development team prepared various rewards for players. Look forward to it this Wednesday!