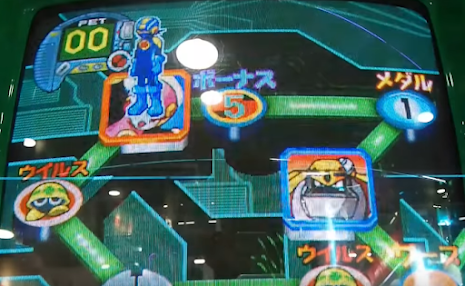 Footage from an obscure, nearly-20-year-old Rockman EXE arcade game has appeared online. And while it's not the most exciting thing to watch, it's still a piece of history, now preserved.

The rarity, which alluded fans for several years, is Capcom and Banpresto's "Character Medal Series: Rockman EXE", a medal-type game from 2002. It was found at an unassuming game corner by Alisia pxyls.

The game tasks players with navigating Rockman.EXE around a board to collect medals (i.e arcade tokens) that can be redeemed for prizes. The goal is to accumulate as many medals as possible in six dice rolls. Medals are won by landing on a Mettool space, engaging in an event with a Net Navi (Roll.EXE and GutsMan.EXE) or "cashing out" on star panels.

All in all, it's a simple game designed for small kiddos. It puts into perspective how much more in-depth Rockman EXE: The Medal Operation was three years later. That machine was far more "game-y", requiring strategy and quite a bit of free time to win medals (sessions reportedly lasting up to two hours!). There's some excellent footage of Medal Operation up now, too.

Thanks much to draconispax for the tip!