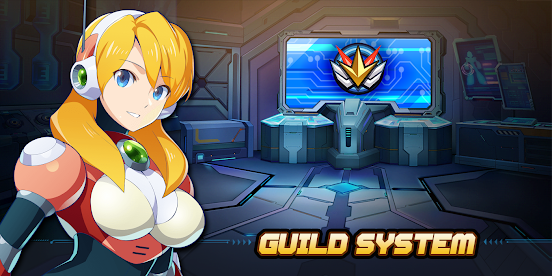 Originally announced back in April, Rockman X DiVE's Guild System will debut on September 8th if we believe the Official Japanese Twitter account. The Guild System will provide players with new means to cooperate, gain rewards and defeat bosses.

Starting August 25th, a new button will appear next to the mission button on the main menu. Clicking it will let you access the Guild System... but the Guild features themselves won't be available until later.
To create or join a guild, players need to be at least level 30 and, in order to create your own guild, you will have to pay 500 EM. From that point, you can invite up to 9 players, set a custom message or set conditions that need to be met in order to join the guild. (example: a "power requirement") Other players can freely join your guild upon the guild leader acceptance, too.
By donating Zenny, guild members can obtain rewards such as single cards, card packs, skill points or weapon boxes among other things. The daily goals that will dictate the amount of rewards are 1, 100k, 400k and 1000k Zenny.
Once a week, a guild boss will be available. Guild members will fight the boss in the same fashion as as a typical Raidboss. What's more, players can gain buffs by defeating lesser bosses that appear alongside the main boss.
For the first guild boss, we will have Wolf Sigma with Chill Penguin and Goliath.

Guild Leaders can set a unique badge to make their Guilds more recognizable. Among the badges revealed, one in particular stands out: the Star Force badge. The Star Force series has yet to join the Deep Log. A sign of things to come?
Finally, the development team prepared a 3D environment for each guild. You can see the characters running around and rewards will be sent to those players that "join a guild", "fight a guild boss", "reach specific number of members in a guild" or "make a donation".
This is just the tip of the iceberg, though. More Guild features will become available down the road. There's a lot of potential here. Be sure to try it out when is out!
Posted by Reploid21XX at 8:46 PM