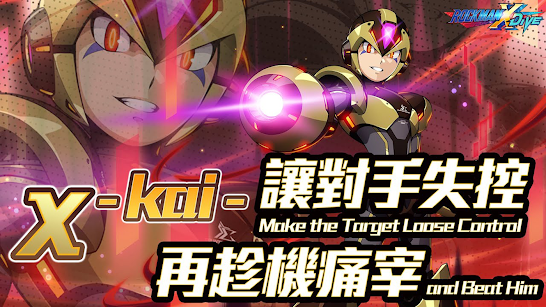 Released as a limited edition figure at New York Comic Con 2015, TruForce Collectibles' χ-kai- is due to become a playable character this week. What’s more, a new event called "X-Hunters" is about to begin.
Find all the details after the break! 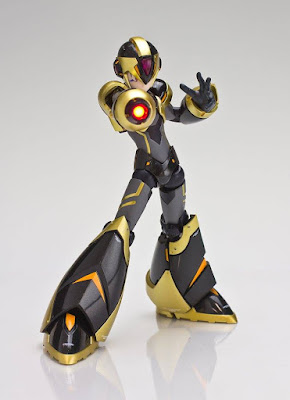 If you need to refresh your memory about the origins of the 4th member of the X-Hunters, here’s  χ-kai-'s bio and Keisuke Mizuno's comments from the figure’s packaging:

Leader of the X-Hunters.
Long ago when Dr. Wily stole Mega Man’s blueprint from Dr. Light, a prototype was built. However, with the development of Zero moving forward, this prototype was discarded and forgotten. During the formation of the X-Hunters, the robot was discovered and completed by a mysterious man. Unlike the original blueprint, it was given much higher specs than that of Mega Man X, using state-of-the-art technology.
(At this time, it is assumed there will be no armor evolution as seen in Mega Man X)

■ DESIGNER COMMENT
This concept came from the episode listed in MEGA MAN X OFFICIAL COMPLETE WORKS – There were originally four characters in the X-Hunters, however, one character had to be cut out due to ROM capacity.

It still amazes me that CAPCOM did not bring out a villain that looks exactly like Mega Man X. His armor crest has also been switched to Sigma.

With this info fresh in your head, let's take a look at the trailer!
χ-kai-'s first active skill is "Charge Shot -kai-" which shoots an energy round that can invert the target's horizontal movement and even recover a portion of health.
Multi-Chasing Laser is his second active skill. It's an attack that launches multi-chasing lasers. One passive skills allowing him to gain a shield that grants invulnerability when in use.
This gacha banner also brings the Arc Cracker, a weapon based on Violen, one of the X-Hunters from Mega Man X2. Speaking of weapons, the X-Hunters event that starts this Wednesday through August 25 will grant players a new "spray weapon" as an event reward.
Let us know what you think about χ-kai-, the next addition to Rockman X DiVE's ever-growing roster, in the comments!
Posted by Reploid21XX at 10:09 AM