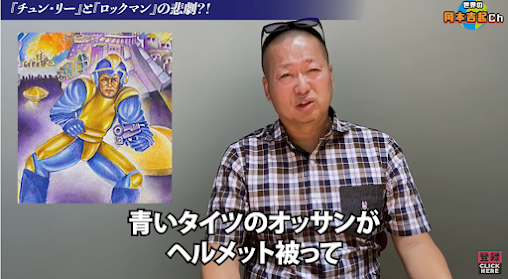 The North American Mega Man 1 box art is nothing short of terrible. And yet it's become something of a cultural icon; a source of parody across the ages. But what if we lived in a world where the "worst box art of all time" never existed?

That's the question on the mind of a one Yoshiki Okamoto. The former Capcom designer, best known his work on 1942, Final Fight, Street Fighter II and Resident Evil, often imagines a world where his younger self had the authority to reject the now-infamous box art. Had the decision been in his hands, he would have killed "Bad Box Art Mega Man" on the spot...

Recounting his early days at Capcom before "rising to the top," Okamoto had this to say about the package design:

"So, the overseas version of Rockman is called Mega Man. Have you ever seen the package illustration? It's an old man in blue tights wearing a helmet. He's standing in a bendy, crab pose with a tube in his hand.

And I couldn't believe this was allowed to happen. It's like, I'm sure everyone hates it! I mean, we made this game together, you know. But because it had to cross the ocean...

...We had to listen to the opinions of the marketing staff over there [Capcom USA] about what's "appealing" and "popular".

If I had more authority then -- if I was stronger -- none of this would have happened. That's what I thought. As a matter of fact, I *still* think about it. In the end, if I had the final say... I could have said "NO!"

If Okamoto had his say, we'd be living in a world without Bad Box Art Mega Man. There'd be no Resident Evil 3 easter-eggs. No "Man Man". And definitely no Free Guy-Mega Man.

So, did all this play out for the better? It's a matter of opinion, I guess. But for Okamoto, it's a nagging case of "coulda, shoulda, woulda".

Now if only we could learn who, exactly, illustrated the thing...

Posted by Protodude at 9:28 PM