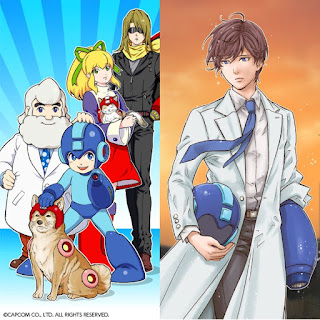 Last December, it was announced that two brand-new Rockman manga would launch in Spring 2021. That day is upon us.

The first chapters for both Rockman-san and Rockman-chan have been posted on Young Ace UP for free. Although each are presented in Japanese, there's no doubt we'll be seeing fan translations soon. Official English adaptations have yet to be confirmed.

Rockman-san follows the every day life of a grown-up Rockman as he deals with the tumultuous demands of an adult world. Older versions of Roll and Robot Masters make up the supporting cast. Meanwhile, Rockman-chan is a gag manga starring an "innocent" Blue Bomber who carries out Dr. Light's often-ridiculous demands.

You can check out the first chapters here or, alternatively, the following direct links:

We'll let you know when English versions become available - no worries. New chapters are expected to drop on May 12th. Stay tuned for continued coverage!