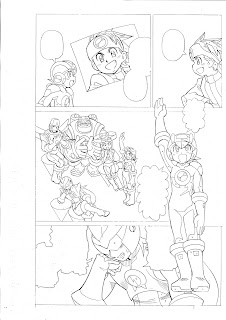 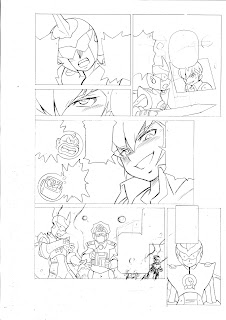 To commemorate Rockman EXE's 20th anniversary, Ryo Takamisaki has been hard at work whipping up a brand-new one shot story. Plot details are pretty much non-existent at the moment. What we do know, though, is that it will be called "Blues' Runaway." Takamisaki-san posted two work-in-progress pages yesterday, too. No text so... infer away!

The one-shot story will be included inside Fukkan's Rockman EXE 20th Anniversary Treasure Box. It's a big box that comes with a bunch of EXE-themed stuff. You can read about what's inside here. Unfortunately, there are no current plans to distribute the story elsewhere. It's only in the Treasure Box.

What's more, there are no plans for an official English translation. That, coupled with a somewhat restrictive form of availability, means we may be waiting a little while before someone in the community can grab it and translate it. It's a bummer, yeah.

If you have the means to do so, you can pre-order the Treasure Box here.