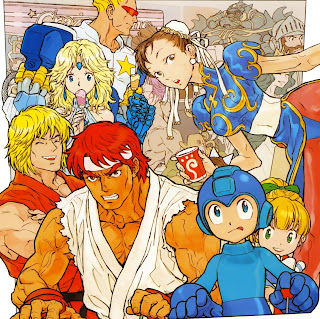 Get the speculation train a-chuggin’. On November 8th, Capcom filed a trademark for "Fighters of Capcom." What kind of game is it? We can't say for certain. I like to think this may finally be that dream game; you know, the one where Capcom characters actually fight each other to a pulp in a no-holds-barred brawl. No Marvel or SNK folks allowed.

But there's also the possibility this is the localized name for Capcom All Stars With Everyone, a mobile card game RPG available in Japan. It's by no means a "fighting" game in the traditional sense, but the idea of Capcom characters versus Capcom characters still stands.

Regardless of what sort of game "Fighters of Capcom" is, the trademark suggests it could appear on anything from consoles to smart phones. For more details (and possible hints), you can find the whole set of intent-to-use applications at the United States Patent and Trademark Office (USPTO).