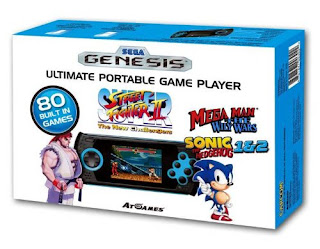 If you're like me, you've been fairly vocal about a Mega Man: The Wily Wars re-release. It's a fun collection of the Blue Bomber's first three adventures + the "Wily Tower", an exclusive mini-game that introduced players to the rather obscure Genesis Unit characters. So as we continue to wait for the game to hit the Virtual Console (and other digital platforms), we can make do with the next best thing: the all-new "Sega Genesis Ultimate Portable Game Player."

For $59.99, this officially licensed handheld comes pre-loaded with 37 Sega games, 3 Capcom games (including The Wily Wars, Super Street Fighter II and one unspecified title) and 40 unannounced games. Moreover, the unit will include an SD Card slot for additional game downloads. According to Amazon, the unit is due out on November 13.

If all this sounds too good to be true, well, it probably is. Sonic Retro notes portable Genesis/Mega Drive units produced by At Games and Blaze in the past have suffered from a number of sound and graphical emulation errors. In other words, this new unit could see similar problems. I suppose we'll know for sure come November 13.

All in all, historic news. This will be the first time since the Sega Channel in 1995 you can legally purchase The Wily Wars in North America. It's no Virtual Console re-release but it will do. For now!

Source: Sonic Retro (via Amazon)
Posted by Protodude at 10:37 PM