Have Another Rockman Xover Pre-Release Item 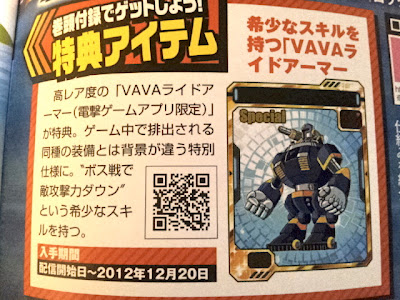 The latest issue of Dengeki Game App magazine (volume 6) contains a promotional Rockman Xover Vile Ride Armor card. Obtained via QR Code, this card can be used to reduce damage inflicted by a boss. Much like Famitsu App's exclusive promo card, you can't use it until you beat the game's tutorial.

It's worth mentioning this card comes from the same issue that said Xover would hit iOS by the end of October. As you've no doubt noticed, nothing's come of that. No one really knows if the game's been delayed or if Dengeki got the date wrong. One thing is certain though: the code for the card will expire on December 20th. Xover should hit iOS before (or around) then.

Now I know what some of you are thinking: the game's been cancelled. I don't believe that to be the case... but it seems like just about anything can happen these days. Whatever the result, I'll keep you posted.

Source: Rinkya (Yahoo! Auctions Japan)
Posted by Protodude at 12:38 AM