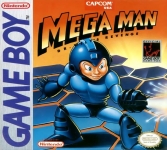 Mega Man Legends 3: Prototype Version may be down and out for the count, but the Nintendo 3DS will soon have itself another Mega Man game, albeit a slightly older one. Mega Man: Dr. Wily's Revenge, the portable classic that kicked off the famous Game Boy sub-series, has been officially rated by the Entertainment Software Rating Board.

The classification is noteworthy in that the game will soon be headed to the North American eShop, perhaps within a matter of weeks. We've no indication how much the game will retail for on our side of the pond, but Game Boy classics run from anywhere between $2.99 and $3.99. Not too shabby; couldn't hurt to set some of that aside.

Hopefully, Dr. Wily's Revenge's eShop debut means the entirety of the Game Boy series will hit the service. It's not necessarily compensation for the lack of Mega Man Mania, but it'll hold you over.