Unused Wily Wars Box Art Could Be Yours 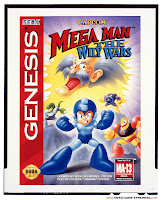 If your personal Mega Man collection is in need of a trophy piece, look no further than this: a legitimate film transparency of the unused North American Wily Wars box art. Currently up for grabs on Ebay, you're looking at proof of Capcom's early intentions to release Wily Wars on a physical cartridge in the states. And it could be yours.

The seller, who runs the Video Game Ephemera, had this to say about the piece:

"For whatever reason, Mega Man: The Wily Wars was never released in North America. It was available for download through the cable TV-based Sega Channel system, but it was not sold here in cartridge form. But that’s not to say that Capcom USA never intended to produce physical copies of the game. When it was originally announced, the company sent a 4x5” transparency of the game’s official North American box art to our offices at VideoGames magazine.

It’s an interesting illustration in the grand tradition of off-model Mega Man box art. In fact, when a lower-resolution copy of this image appeared online several years ago, there was some debate among Mega Man fans as to whether this was the real Wily Wars U.S. box or just a clever fan-art forgery!"

How much will this fine piece of Mega Man history run you? The seller is asking for $110 (free shipping!), but is willing to negotiate via "Make Offer." Bear in mind, you're not getting the boxart itself but the actual film strip that would have been used to mass produce copies of the art had the game released on U.S store shelves. Pretty cool, if I do say so myself.

If this is something up your alley, feel free to check out the complete auction here. Thanks for the tip, Jake!

Posted by Protodude at 2:33 AM