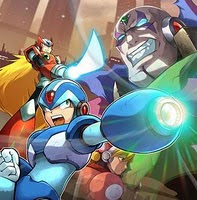 Back in November, a wave of new copies of Mega Man X Collection were released throughout North America, exclusive to GameStop and Amazon. While the game itself was exactly same in terms of content, the reissued 2010 version touted a budget $20 MSRP and brand new, eco-friendly packaging.

As it turns out, Amazon just obtained another batch of fresh X Collection copies, slashing the price down to $12.86. Nice, eh? Well, it gets better. Amazon associates are offering new copies even cheaper. How's $7.82 sound for ya? Pretty slick deal, if you ask me. Mind you, there's no indication how many copies are in-stock, so you may want to act on this deal quickly before things deplete.

Unfortunately, I've no word on a reissued GameCube version. Amazon continues to sell the GC version for a staggering $75, with used copies starting at $24 and up. Just as it was in November, reprints are strictly limited to PlayStation 2. I'm not entirely sure why, but one theory I've heard is there's generally more of a demand for the PS2 version.

Anywho, if you don’t already have the originals or missed X Collection the first time around, you may want to consider investing in this deal while you can. Thanks for the tip, Rabidrodent!
Posted by Protodude at 4:00 PM