Awakening Of The Sleeping Giant

Well here we are. Just a little over twenty-four hours now since Mega Man Legend 3's official cancellation. The past day has been grueling, I know. Nobody is happy. All of us, for the most part, are in mourning. 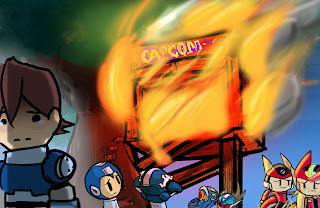 Deep down, we knew this was coming, but we didn't want to believe. I certainly didn't. My initial optimism clouded rationality, I admit that. But it was only a few days before yesterday that it hit me: Legends 3 was in trouble. Big trouble. Sharing in these sentiments, Heat Man, Dashe, and myself quickly set out to kick start the Legends Never Die campaign. In a cruel twist of fate, the game was cancelled just hours after LND launched. Hours.

I spoke a little of my feelings surrounding L3's cancellation at Ask Capcom the other day. However, I've had a chance to wrap my head around things, so here's more of my spiel.

You can imagine how we were feeling when the headline hit. It cut deep. I, personally, can attest to being one of those fans who legitimately waited ten years for this, so news of MML3's cancellation certainly hit a soft spot. It's still difficult for me to describe how I am feeling. Angry? Disappointed? Helpless? It's a mix bag.

I tell myself it's just a game. But that doesn't sooth anything. It wasn't just a game: it was an entity, an embodiment of months of hard work and collaboration between fans around the world. Legends 3, for all intents and purposes, was an interface. It united us; binded us towards a single, common goal. For a community often divided and separated by series bias and diverging opinions, Legends 3 succeeded in bringing us together. United, there could be only one path we would inevitable followed in the wake of Legend 3's termination.

The decision to pull the plug on Legends 3 has awakened a sleeping giant.
Frustration has come to a head, and fans across the globe are now sitting up and taking notice something isn't right with Mega Man lately. Last night proved that and it was simply glorious:

The sheer rage instigated by Legends 3's death is extraordinary. The scale of it all proves that people care for this 20-something year-old franchise. It proves there was a viable market for Legends 3, and it proves Capcom underestimated the fans. Within a single day, trust in Capcom and their handling of the Mega Man brand has been utterly shattered, and fans are lashing out rightfully so.

You're right to say Legends 3 was never guaranteed to come out, true. But what is so sickening, so mind numbingly depressing, is that Prototype Version was played off as the "untouchable" one. In other words, there were no threats of PV's demise, just the opposite. PV would have been used to gauge interest in the full game, and from there, Capcom would choose to either green-light MML3 or not. PV was inexplicably trashed; never to be experienced by the fans.

The general consensus, form my observation, is that Capcom "owes" us Prototype Version. They owe it to us to play the very game we helped build. Truthfully, I'm on the fence with this one. As much as I'd like for Capcom to say "Fine. We'll give out PV to a select number of fans", it's release just doesn't seem feasible. Even so, you still have every right to rally and "boycott" however you see fit.

The passion you have for Mega Man Legends 3 and this franchise is enormous. Passion can be a valuable tool. I implore you, all of you, to see to it your opinion on the matter does not fall upon deaf ears. Use this newfound unity to instigate a change in the franchise. Join petitions. Join the Facebook group. Take to the forums. Snail-mail Capcom. Join the revival campaign. Hell, picket during Capcom's Comic-Con press conference, if you feel like it. Do something (safe)!

We cannot undo Legends 3's fate.  However, our voices united can influence the course the franchise takes next. As a CONSUMER, you pack a mighty punch. You are both feared and worshiped by developers. You can instigate change. Use the anger you are feeling in a positive way. Help lay the foundation for a brighter future for Mega Man and speak up.

As for me, I will continue to support Mega Man. I'll see this guy through thick and thin. Capcom, however... well, I'm on the fence.
Posted by Protodude at 3:31 AM