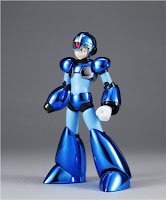 Are you attending this year's San Diego Comic-Con? Then you'd best make haste and head on down to Bandai's booth ASAP. This year's exclusive is none other than a delightfully awesome Metallic Mega Man X D-Arts, courtesy of Bluefin and Tamashii Nations.

The articulated figure boasts a shiny coat of blue-metallic armor... even the packaging is shiny! Inside the box, you'll find a handful of accessories: a set of X-Buster blasts, rotating triple-shot effect parts, detachable hands, and two interchangeable faces. You can check out a boatload of pictures of the figure in action via Rockman Unity, where Bandai's Adam Newman was on-hand to exhibit X before Ucchi-san and Capcom heads.

Metallic X's exclusivity to the U.S is said to be a gesture to Tamashii Nation figure fans who weren't able to purchase the many Japanese exclusives of years past. Further, the very existence of the metallic figure is due to the immensely positive reception Bandai has received from the U.S market. If you're attending SDCC, I'd taken advantage of the offer.

You'll be able to purchase the figure when Comic-Con kicks off on July 20 at the Bluefin/Bandai Booth (3545). Get him while supplies last!
Posted by Protodude at 12:20 AM