It Just Keeps Getting Worse (Updated)

Not entirely satisfied with Capcom's reasoning for ditching Mega Man Legends 3, fans are taking the fight to Twitter in an effort to squeeze out the real reason(s) behind the game's death. Beginning with a lone Tweet from @dk_lance directed at Capcom Europe, the "truth" comes out... And it's not pretty.

@dk_lance writes, "I’m sad to know Legends 3 was cancelled for 3DS. Someone making decisions at Capcom’s R&D HQ should get fired…" A legitimate, and well founded plea. What say you, @CapcomEuro?

"unfortunately so few fans took part in the creation of the game. It was felt the project was not worthwhile :-( "

Wait, what? The blame game is in full swing, and we're on the other end of the barrel?

Disgruntled with Capcom Euro's response, even more Twitter users chimed in to join the fight, and CapcomEuro was there to field them all. Brace yourself, because if you weren't frustrated before, you soon will be. Hit the jump when you're ready...

@CapcomEuro What would it take to get the executives to reconsider their decision?

@CapcomEuro Please give us a response. Fans are rallying as we speak, writing, petitioning, the works. At least release the demo to (cont)

@CapcomEuro (cont) To see how it fares. It’s pretty much done, from what I hear, so what do you have to lose?

Right! What do you have to lose? Your response, Capcom?

@kdawg3000 it's a shame the fans didn't want to get more involved :-( if we saw there was an audience for MML3 people might change minds

It appears that a lack of interest in the Devroom contributed to Legend 3's demise. The Devroom, from what I've been told, amassed some 15,000 users across the world. If that number were converted to sales figures, well, it's not pretty.

Even so, is it really fair to gauge interest in the project from the Devroom alone?

Uh-oh. Here comes my optimism. That last Tweet? See that? Should we take that at face value? Use that as pure motivation to rally the troops, prove there's an audience and get MML3 back on its feet? 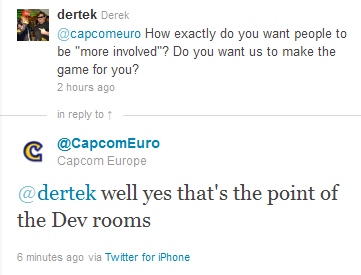