Legends3.com Is Your Gateway To Reinstating MML3 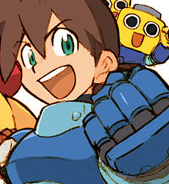 Looking to join the fight for Mega Man Legends 3 but don't know where to start? Fret not: the folks behind MegamanX9.com have opened the doors to Legends3.com, a central hub that directs fans to the core campaigns aiming to reinstate Legends 3.

Simple, seamless, and convenient. This single webpage currently redirects you to four core campaigns: Get Me Off The Moon, the Capcom Unity Petition,  Become a Servbot, and Christian Svensson's Legends 3 opinion thread. Four different campaigns, united under a common goal. It is in your best interest to invest time in each, so do check 'em out when you've got some time.

More over, you are encouraged to get the word out about Legends3.com. Not just to friends and family, but now's the time to start relentlessly pursue coverage in the bigger media outlets about our efforts. Capitalizing on other gaming outlet's audiences will help increase the petitions' numbers dramatically. Heck, Get Me Off the Moon's success today is due in part to branching out to GamePro, whose audience contributed to today's 35,000+ members. Imagine our footprint if we headline Kotaku, 1Up or G4 even. Increasing our numbers is key to success and you, as an ambassador of sorts, can make that happen.

We realize there are other campaigns and efforts not included on Legends3.com. We'll get to adding those, of course, but for now please give an equal amount of attention to Legends Never Die and the recently established Tanomi.com effort. Legends Never Die continues the snail-mail campaign which began mere hour before Legends 3 was cancelled, while Tanomi aims to collect personalized messages from fans around the globe.

It truly is amazing how quickly we're organizing all of this, and for that you have my respect. I'm doing all I can on my end and I look to you to do your part as well. We're going the distance here. We'll see this one to the end, together, as a community.
Posted by Protodude at 11:17 PM