Having received roughly 450 entries, Capcom has reached a verdict in their search for the Bright Bats' mascot. We've seen some great designs bustling with creativity from around the world, but there can only be one who stars in Mega Man Legends 3! Please give a warm welcome to Tinker the ferret! 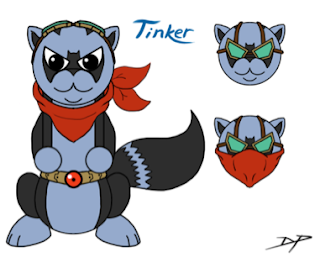 Tinker is the product of Devroom member Espiownage (Servbot #1061), who will go on to star alongside the Bright Bats. Additional details about the character from Espiownage:

"Tinker is a mischievous little ferret that the Bright Bats found while exploring ancient ruins, where Tinker had accidentally wandered inside out of his own curious nature.  When he was found, he seemed like a normal ferret except for a strange belt with a reaverbot eye around his waist.  Oddly enough, Tinker seems very protective of it when people even try to touch it.  When the Bright Bats took him in, they couldn’t think of a name for him until Barret noticed the curious ferret would observe Grill as he made his inventions, one day seeing him try to create something himself out of the junk Pic had collected.  Barret came up with the name Tinker due to the way he would play with the parts and his curiosity."

Congratulations, Espiownage! You can check out some of the developers comments at this report here. Further, please do check out the honorable mentions and runner-ups, and give them a round of applause for all their hard work.
Posted by Protodude at 4:51 PM