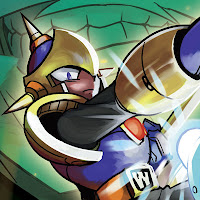 UDON's Mega Man Tribute is coming soon. Real soon! In anticipation for the artbook's release, Matt Moylan has shot us some clarification in terms of the book's editions. Two versions of Mega Man Tribute will be available in a matter of weeks, each with their own unique cover art:
The hardcover edition of Mega Man Tribute is exclusive to the San Diego Comic, which sports a beautiful dust jacket (as seen on UDON's official site). Underneath the jacket, however, you'll find Jeffrey Cruz's art from the softcover edition.

No doubt, many of us who won't be making the trip to SDCC will be missing out on the hardcover edition, and its subsequent exclusive Ariga art. To remedy this, Ariga has created a second piece, available in both versions of the book. The piece is currently shrouded in mystery, but I've obtained an exclusive preview shot directly from Matt. The illustration is said to feature a number of Ariga's personal favorite characters, such as Enker (pictured) and Punk.

So that's that. If you're headed to SDCC, don't miss out the opportunity to score the exclusive hardcover edition! And hey, there might just be a special guest there...
Posted by Protodude at 12:30 PM