Relish In The Memories Of Old Mega Man Sites 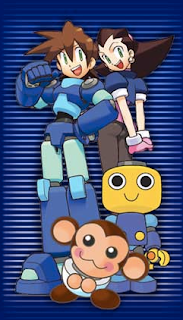 Don your nostalgia goggles and take a trip back to the nineties with the WayBack Machine. At long last, the Internet Archive's crawl has hit Capcom the front, subsequently churning up a plethora of old, official Mega Man webpages.

The uncovered sites are a treasure trove of long lost assets, images and media from a number of late 90s - 2000s Mega Man titles. For example, when was the last time you saw these full color, 3D Legends 1 renders? And that's just the beginning: ancient press releases, old release dates, flash games and wallpapers... it's all there. Below, you'll find a small sampling of what the archives have to offer.  For the rest, you'll have to navigate around on your own!
Because there is so much to look at, I've only glimpsed at few of the hundred or so recently recovered sites. There's still quite a lot to go through and I'm certain you'll find a few things that bring back some fond memories. For example, it's funny now, but just look at how many times Mega Man Mania had its release date bumped. Fond memories with that one. And that 15th Anniversary site? Hours wasted playing that silly little flash game.

For the sake of preservation, I highly advise fans and other Mega Man fansites to save as much content from these pages as possible. WayBack Machine isn't glitch-proof, and many archived sites do go down from time-to-time. Better safe than sorry!
On a personal note, I grew up on these sites -- they were my stomping grounds as a child. These meager little sites helped solidified my love for Blue Bomber, providing me with screens and news on the then-latest games. Their return to the world wide web may not be a big deal to you, but for me, it's a blast from the past. Have a look around and enjoy!
Posted by Protodude at 7:49 PM