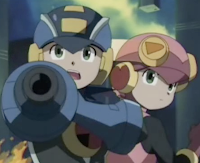 After eight years of being on Japanese air waves, the animated Rockman franchise has come to an end. Kids-Station, home to reruns of Rockman.EXE Beast and Ryuusei no Rockman, has chosen to remove both shows from their schedule with no signs of either show, or previous seasons, returning any time soon. For the first time in eight years there is no Rockman to be found on Japanese television.

While new episodes of the animated franchise haven't been produced since 2008, Capcom continued to sponsor the EXE and Ryuusei television series on Kid-Station, since 2007, in the form of reruns. Kids-Station also played host to a short-lived mini-television series entitled "Rockman Stadium", a program that aimed to promote the then up-and-coming Shooting Star Rockman 3. Stadium ended its run in the Fall of 2009.  In short, you could find Rockman on TV ever since 2002, despite the lack of any new episodes or series.

Seeing that Capcom has recently used reruns to promote new EXE/Shooting Star games, the chances of shows re-airing is always a possibility, but we've yet to hear even a whisper if a new game from the "Network" series is in development. Frankly, I'm a bit surprised; we traditionally hear something right around this time of the year.

Thanks to Ristar for the news!
Posted by Protodude at 12:57 AM