Just sending out a friendly reminder that Hitoshi Ariga, author and illustrator of Mega Man Megamix, will be attending Fan Expo in Toronto next week from August 27-29. Not only slated to appear at Udon Entertainment's booth for autographs, but he'll also be doing a panel on Saturday.

Further, for those who cannot make it out to Fan Expo, Ariga will be appearing at the Japan Foundation on Thursday, August 26th at "Mega Man! Megamix! Mega Event!", an event held in Ariga's honor. This event is free to public, but Udon informs me an RSVP is required due to limited space.

With so much going on, it's easy to get confused, so Udon has hit us up with a press release detailing everything going down next week in great detail. Check it out for yourselves after the jump!

Hitoshi Ariga will be at the UDON Booth signing autographs throughout the show. He’ll also be doing a panel on Sunday: 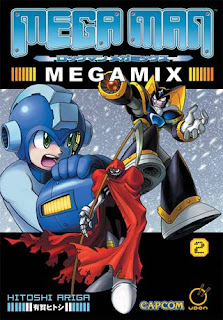 TORONTO—The Beguiling, Canada’s Premier Comic Book Retailer is proud to team with UDON Entertainment and The Japan Foundation to welcome Hitoshi Ariga, the hugely popular and respected manga creator of MEGA MAN MEGAMIX (the official manga of the phenomenally popular Mega Man video games) to Canada for the very first time! Mr. Ariga will make a very rare North American appearance at Mega Man! Megamix! Megavent!, a special event held in Mr. Ariga’s honour to celebrate the launch of his manga for English-language audiences at The Japan Foundation on Thursday, August 26th at 7pm. Please note, while this event is open to the public an RSVP is required.
With over 30 million Mega Man videogames sold worldwide, the character is easily one of the most popular and recognizable game characters in the world! MEGA MAN MEGAMIX, the new manga series written and drawn by Hitoshi Ariga and published by UDON Entertainment, is the official manga chronicling the stories of these games—and the stories behind the stories as well! The second volume of MEGA MAN MEGAMIX is scheduled to debut at the event, and volume 1 will also be available. In addition to the popular manga series, Hitoshi Ariga is an acclaimed character designer and graphic designer for video games and creator of many manga series.
“We’re truly honoured to welcome Ariga-San to Toronto,” said Christopher Butcher, event organizer and Manager of The Beguiling. “His work is very energetic and passionate, and it’s fantastic to see the games I remember investing so many hours into brought to comics! I think both fans of Mr. Ariga’s work on the MEGA MAN MEGAMIX manga, and fans of the Mega Man video games in general, are very fortunate to be able to meet him and will enjoy the event.”
The doors will open for the event at 7pm, with the event beginning at 7:30pm. Mr. Ariga will give a short presentation (In Japanese, with an English-language interpreter), and following the presentation he will take questions from his fans and the audience, and will sign autographs for all in attendance. Manga and Artbooks featuring Mr. Ariga’s work will be available for sale at the event courtesy of The Beguiling. Classic Mega Man video games and gaming equipment will be available to play and for sale courtesy of A&C Games in Toronto.
Because of the popularity of Mr. Ariga’s work, the organizers will be capping attendance at 100 participants. To attend, please RSVP at (416) 966-1600 ext. 103 or online at http://www.jftor.org/whatson/rsvp.php.
Posted by Protodude at 8:18 PM