Considering the fact it's not very often betas of Mega Man/Rockman games get leaked, I just had to post this up here. Reader Techokami sends word that Skaarg, a member of the Sonic Retro forums, has dumped and released an early prototype of Rockman X6 onto the net, which you can download here.

Being an early build of X6, there's quite a few differences from the final retail version despite being produced on September 28, 2001 (two months prior to the game's Japanese release). For example, some menu screens actually contain doodles and sketches standing in as placeholders until the final graphics were implemented: 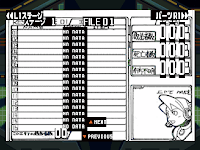 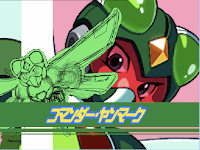 Other differences of note include:
There's probably a few more oddities/differences present so I'll be on the lookout for those when I play the proto for myself tonight (might even record it and put it up on YouTube, or something). I'll be updating this post accordingly and, should you find anything interesting, speak up in the comments.

Thanks for the tip, Techokami!
Posted by Protodude at 9:49 PM