It's been a rough year when it comes to new Mega Man games. So to tide you over until Capcom does something, my pal Allahweh and I are are distributing a little something you might appreciate: Rockman Gold Empire. 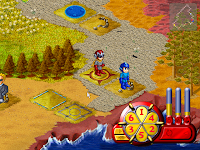 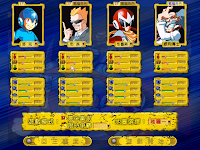 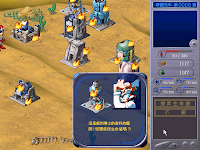 Download it here!
Released for the PC in 1999, Gold Empire was one of many exceedingly rare Taiwan exclusive Rockman titles. It may not look like it, but the game is actually *official* -- produced by Strawberry Software Incorporated, under license by Capcom.

For those not in the know, Gold Empire is basically a spiritual successor to RockBoard... basically, Monopoly with a Rockman twist. Yes, it isn't the greatest thing under the sun but it's a quirky little game you might want to play for just for kicks. More detailed information can be found at the Mechanical Maniacs' documentation here.

Now then, the file you're downloading is an ISO, therefore you should mount it with something like Daemon tools. Here are some additional instructions provided by Allahweh:

"When the disc runs and pops up with a menu, select the option furthest on the left which should install the game's files into your Program Files (or Program Files x86 on 64-bit machines) directory as "RGE."  From there, you shouldn't need the disc anymore to play the game, though alternatively the second option from the left on the disc menu will run the game.  After it is installed, double-clicking "Rockman" should start the game.  If you get an error message, try running the game as an Admin and that should bypass it."

Once you get all that out of the way, you should be good to go. The game is, for the most part, not in English. It's playable to a degree, but I highly recommend you refer to the Mechanical Maniacs' article to grasp an understanding of the gist of what's going on.

Thanks to Allahweh for the dump! If you have any trouble in getting the game up and running, let us know in the comments. I'm sure Allahweh would be more than happy to help you out. Enjoy!
Posted by Protodude at 10:52 PM