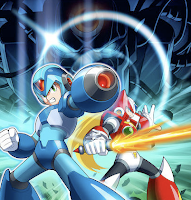 According to a report over at Hankyung, Capcom and NeoWiz Games' collaborative project, Rockman Online, is set to launch in Korea later this year. While a specific release date wasn't disclosed, RMO, alongside two other titles, is said to make up NeoWiz's lineup for the remainder of 2010.

Unfortunately, the report was mum on new details about the game. However, the article provided a summary of the basics we've known for a while: Rockman Online, a side-scrolling action RPG, will boast 3D graphics on a two dimensional plane, much like Mega Man X8 and Maverick Hunter X. Familiar faces and NPCs will make up the game's cast in addition to online players. Further details are expected to surface in the near future.

Rockman Online is currently exclusive to Korea and regions within Asia. While there's been no word of a release for the West, a Japanese release is likely, if a trademark is to be believed.

Not much else to say than that. I'll be keeping my ears out for any new information.
Posted by Protodude at 12:34 PM