Even More Oddball Swag From Thailand

From the wacky world of Thailand bootlegs, comes two more unlicensed Mega Man products that are sure to raise a couple eyebrows. Admittedly, not quite as obscure as the space gun from last week, but pretty bizarre nonetheless. 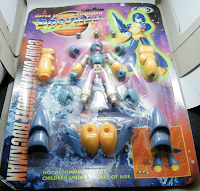 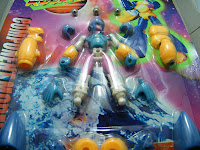 Spotted by Rock Miyabi and Rummenie, here's a cheap wannabe Mega Man X, based off of Bandai's Mega Armor model kits. "Super Fighter Component Model Rockman" here apparently sports two Busters and a blue/yellow armor that just reeks of Mega Man 1 American box art influence. Interestingly, the toy is capable of firing little pellets from its Buster(s), so it's certainly unique in its own right. The toy's actually up on Ebay right now if you're interested in adding this oddity to your collection.

And in the apparel department:

Pretty self explanatory; Mega Man X and Batman, meshed together in one truly psychedelic hat. Quite an odd crossover choice, if you ask me -- I don't even think we have fan-fiction based on that pairing.  Interesting bit of trivia: the hat's owner, reader Robert, points out the image of X is actually based off of his player select sprite from Mega Man X4.

If you happen to come across other bootleg stuff of equal or greater obscurity, send them my way. We'd love to see it!
Posted by Protodude at 1:23 PM