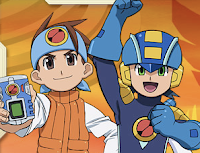 Fans of the Rockman EXE Beast anime will be happen to know that, after nine long months of waiting, Wolfpack Productions in cooperation with Puku Anime have subtitled and released the final three episodes of the show online. You can download them via Tracker here.

With the Beast wrapped up, what happens next? Finish up Beast+, of course. Rock Miyabi has announced that the team is currently prepping more subbed episodes for future release, and work has even begun on translating more episodes of Stream. Hopefully, we'll see both shows finish up sooner rather than later.

Future updates can be found over at Rockman Perfect Memories.
Posted by Protodude at 12:07 AM