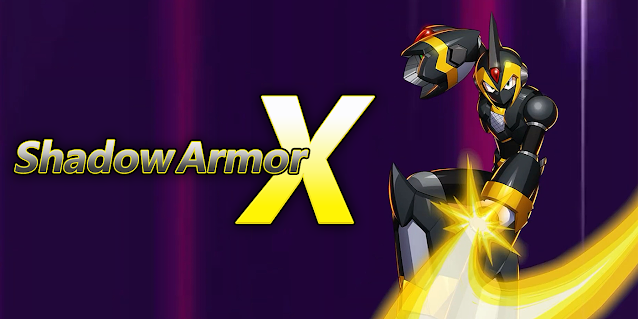 In the midst of a slew of Monster Hunter themed reruns and with a new event and new characters in the horizon Capcom are once again expanding the already vast selection of X armors in Rockman X DiVE.

Directly from Rockman X6, Shadow Armor X is set to join the game this Wednesday!

Shadow Armor X's first active skill is Giga Attack. It unleashes an attack that damages all on-screen enemies and grants a shield. It also releases two terrain-ignoring crescent moons that surround Shadow Armor X and damage any enemy that comes in contact.

One of the passive skills will defocus the enemy.

His second active skill is Shadow Shot. It releases three shurikens that ignore terrain and cause weakened defense status when hit the enemy.

One of the passive skills will grant an irremovable speed boost and dodge.

Just like Gaea Armor, he comes packed with the same abilities from the original game. Shadow Armor X can cling to walls, ceilings and is immune to most terrain damage. When he clings to a ceiling, he can attack or dash.

So there you go; one more X armor for the collection. He sounds quite good on paper. He is a DiVE Fest character so players can take advantage of the improved gacha drop rates to get him!

Let's us know what you think in the comments!