Mega Man: The Power Battle and Mets Slated to Appear in Street Fighter 6

It's not unusual for Mega Man and Street Fighter to cross streams. It's a tried and true tradition. But with Street Fighter 6, we'll be treated to something a little different.... 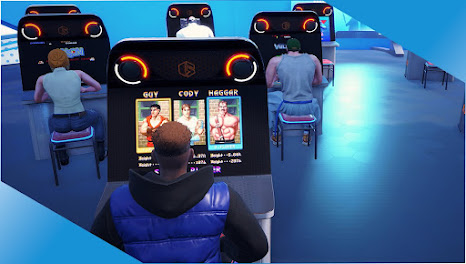 Via today's Tokyo Game Show 2022 online presentation, we get a quick glimpse of a virtual Mega Man: The Power Battle arcade cabinet. The Power Battle will be playable in Street Fighter 6's Battle Hub, a new social hangout where players can build their own avatar, enter tournaments or rock out to tunes in a DJ booth. Final Fight, SonSon and more classic Capcom arcade titles will be on-hand to play as well.

Everyone's favorite hardhat bots are joining the fray... sort of. Mets will be one of the many optional gimmicks players can use in the new Extreme Battle mode. The footage from the TGS 2022 online presentation shows a mid-sized Met dropping down from the sky in a match with Chun-Li and newcomer Kimberly. The little guy appears to inflict damage by walking over an opponent. It's more like a waddle, I guess. Pretty cute!

Street Fighter 6 will enter a closed beta test from October 7 to October 10 on PlayStation 5, Xbox Series X|S, and PC/Steam.

Posted by Protodude at 5:13 PM